Air Rifle Shooting is an Olympic and Commonwealth Games Sport.

In this sport, the shooter must stand and hold the rifle. They are allowed to use a canvas or leather jacket, as well as canvas or leather pants and special flat-soled shooting boots. The target is set at a distance of 10 metres, the skill involved to hit the 10 in this standing position is incredible.

Each competition shot fired can score a maximum of 10 points. In Air Rifle, as the target is so small outward gauging is used to score the target. This means that a small gauge is inserted into the shot target, and depending on the outside position of the gauge as to what the score will be. There are also electronic scoring machines available, there are much faster and more accurate than the manual gauge method.

In Air Rifle there are two types of targets to shoot at, the first is a single target, this is a square piece of cardboard with one target printed in the middle (as below left photo). The second is a strip containing 10 targets. The scoring method is the same regardless of which type of target is used. 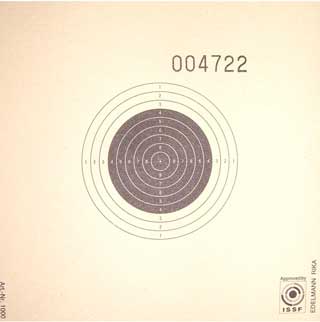 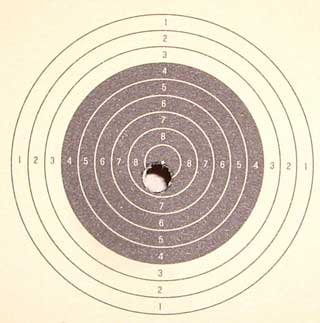 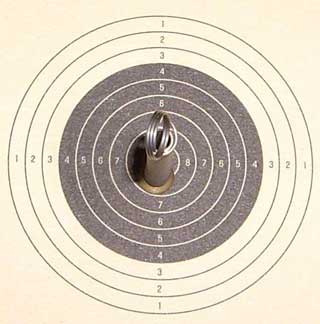 Once the gauge is inserted and the line outside the gauge is not broken then the shot is in, this shot is a 10
Toggle Sliding Bar Area