Bench Rest shooting is a National and International competition.

In this sport, the rifle is supported on a stand sitting on a bench. The shooter is responsible for aiming onto the target via a telescopic sight. This discipline requires shots to be perfectly precise as scores in Bench shooting are typically higher than any of the other disciplines. Bench is also more accessible to a wider range of shooters as the rifle is supported via the stand and bench so there is no stress on the shooter, this makes it a lot more enjoyable to a wider range of people.

Each competition shot fired can score a maximum of 10 points. Each target has a inner ten (or in old terminology a “Bulls Eye”, to score a 10 the bullet has to touch or clip this inner ten. But if a shooter has a perfect shot and eliminates the inner ten then they score extra, the total number of points and inner tens will decide the final score for the shooter. 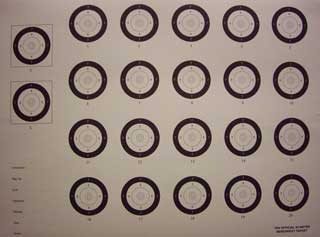